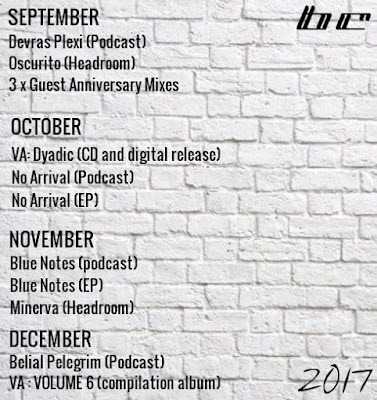 August was a relatively quiet month here at Bricolage HQ but we spent the end of summer working away behind the scenes to ensure that there's some real treats lined up for the remainder of the year. Unique podcasts, special guest mixes, two EPs plus the latest volume of our various artists compilation series. All that topped off with our most ambitious release to date in the form our first physical release.

To start off September we had Austin based sound design boffin, Devras Plexi, curate an hour of underground electronic gems from the underground. A unique selection of sounds from a unique talent. This particular podcast has proven to be one of our most popular yet. Listen for yourself below.

As we hit September, Bricolage enters into it's third year of existence. To celebrate this mini milestone we've got three special guest mixes lined up that take a look at a slice of our discography over the last two years.

For the first mix we got Manchester after party troupe "Quixotic" to mix together some of their favourite beat driven tracks from the label. They've been long time supporters of the label and have concocted a variety of tracks from our early days right through until the more current releases.

The second mix will come from Bricolage's own Minerva and explores the more experimental side of our catalogue before friend of the label, Kinoko, closes out the anniversary mixes with a presentation of some of our ambient works. Keep your eyes peeled for them as they drop.

To round off the month we have Oscurito returning behind the decks to provide us with our latest mammoth Headroom session. A two hour extravaganza awaits. The Glaswegian released his second EP on Bricolage in July. The "Eastern Philosophy" EP combined cinematic influences with Eastern tinged melodics and full bodied rhythms.

In October we drop our very first physical release on Bricolage. Over the summer months we brought together an assortment of names from the roster to work on the "Dyadic" project, this collaboration album, consisting of 11 specifically made exclusive tracks, lands at the start of next month. The finished article is a melting pot of sounds from all over the electronic spectrum. This meeting of musical minds will be officially released on limited number CD and digital format on the 2nd of October.

Have an exclusive first look at the artwork below. You can expect a full tracklisting and audio previews in the next few days. Stay tuned. 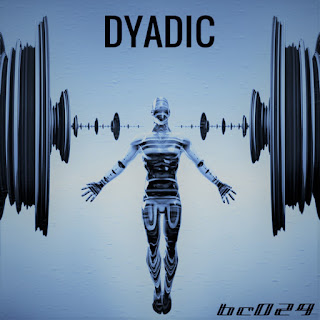 October also sees a double header from one of our most recent roster additions, No Arrival. His podcast lands in early October followed by a new 4 track EP "The Chance To Fail" at the end of the month. Check out his contribution to our last VA compilation back in June below.

We start off November with another double header. Glaswegian electronic experimentalist, Blue Notes, drops both his first podcast and standalone release for the label. Both are guaranteed to be sonic works of art.

Have a listen to the full length "Hymn" collection from earlier this summer.

Our last Headroom of the year will come in late November and is provided by the diverse mixing skills of Minerva. She followed up her 2016 "Oligarch" track on Bricolage with a rousing all vinyl podcast for us back in January this year. We're excited to give her free reign over the extended two hour timescale of Headroom before the year's out and you can fully expect a stellar journey with many a twist and turn.

December kicks off with a podcast from the scarily consistent US producer, Belial Pelegrim. This is a man that is continually producing flawless and out there yet accessible music and we're sure his podcast will be in a similar vein. This is yet another mix that we're incredibly excited about landing in our inbox. It'll be that good.

Check out his phenomenal production skills on "Exoskeleton" which was released on Bricolage this summer.

We round off the year with Volume 6 of our Various Artists compilation where we'll once again be bringing plenty of new and intriguing sounds to your ears courtesy of more specially handpicked artists from around the world. We've already started the demo and selection process on collating new and interesting producers for Volume 6 and we'll feed you more info on this release as it progresses.

The remainder of 2017 is shaping up to be special. Join us for the ride.
Posted by Bricolage at 21:18