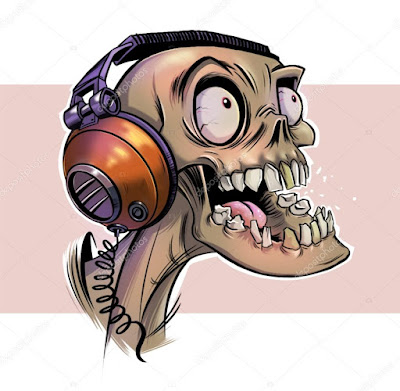 Our "Ghost Stories" section has become custom for Bricolage in Halloween season over the last few years and has proved to be popular among our fans and artists. This year's selections of eerie electronics and spooky soundtracks come from All Buttons In, GrevusAnjl, Crest Of The Syndicate and Minimal_Drone*GRL.

So, without further ado....

"My first pick is "Bela Lugosi's Dead" by Bauhaus.  Known as the first Gothic song in 1979, this is 9 minutes of experimental brilliance with atmospheric guitars and skittering drums.  Drawing from post-punk, alternative rock with a touch of dub, this is a journey into the void with a dark and dreary vibe from beginning to end.  Always a classic for me."
2. Dario Argento - Suspiria

"I'm a huge fan of classic horror movies, especially the Italian genre "Giallo".  "Susperia" by Dario Argento is one of my favourite films in this genre.  Surrealistic and colourful visuals and a thick fairytale atmosphere give this movie a unique touch that really gets your imagination going.  Goblin's wailing, strident prog rock score - with pounding rhythms, heavy breathing and dissonance, maintains the suspenseful, supernatural tone throughout."

"My next pick is "Nosferatu" by F.W. Murnau.  Here is the story of Dracula before it was buried alive in clichés.  Murnau's silent film (1922) was based on the Bram Stoker novel.  I admire it for it's artistry and ideas, it's atmosphere and images, than for it's ability to manipulate my emotions like a skillful modern horror film.  It doesn't scare us, it haunts us.  It shows not that vampires can jump out of shadows, but that evil can grow there, nourished on death."

"Frost's music is all about contrast - merging beautiful classical minimalism with the dirty grind of metal and drone core.  This combination is unsettling to the mind, refusing to split in half and choose between genres.  For me, this track evokes the terrifying, uncomfortable, sickening feeling of being stranded in an evening snow storm when you hear the sound of a pack of wolves howling in the distance."

"My final pick is another Giallo film "Black Sabbath" by Mario Bava.  This trilogy of horror stories serves as an interesting look at a trio of varying filmmaking styles.  All three are wonderfully evil, stylistic with incredible camera work and beautifully designed sets.  My favourite of the the three is "The Drop of Water".  It's about a nurse who steals the ring off an old occultist woman's hand only to have her grinning corpse torment her from beyond the grave.  The initial shock of seeing the old witch is truly bone-chilling."

CREST OF THE SYNDICATE

1. Hobo With A Shotgun

"This is a Canadian Grindhouse film and the reason I pick this as its one of my favourite horror films. Its gory, its crazy, its disturbing and the story is pretty simplistic but that is what makes it so great. The first time I saw this film was in 2012, a friend recommended it to me and after watching it, I was hooked, my favourite part is the summoning of 'The Plague', 2 armoured demons from hell.. If you haven't seen it and you like trashy horror films, I'd fully recommend it."

"Where to begin?! This song is awesome, the video is disturbed... probably not in the spooky halloween sense but is well worth a mention. However its the Little Lord Faulteroy Mix is where its at, try listening to it at 2am with its bizarre creepy speech but nonetheless a brilliant track (all the mixes included)"

"The spooky opening track from the fantastic Deadringer album. Its spooky melodies, old samples and hip-hop beats make this track a must for any halloween party playlist. Plus check the whole album (if you haven't) its a masterpiece!"

"This track, where to even start with this... the album 'Horse of the Dog is one of my favourite albums purely for its intensity, its guitar riffs and general gloominess (I'm not a gloomy guy by the way). This track is the standout for me, I can't remember when I first heard this but I'm sure it was on the Steve Lamacq show and was immediately hooked and bought the album on CD the next day, this has a great hook and the vocals are insane at the end. The album is well worth listening to and doesn't last long at 28 minutes."

1. Surachai - Temple of the Weakening Sun

"One of Surachai's finest synthesizer explorations, a deep and dark ominous masterpiece. Well balanced between melodic warmth and crushing mayhem. The video is equally stunning."

"Asteroids is a vast and spacious track with deep pulsating subs that induce intense sensations. Full of V.I.V.E.K's distinct dark and menacing atmosphere."

"These first two are a blast from my past. Songs pulled from my dark, angsty youth. Starting with my all time favorite Goth song, Bauhas 'Bela Lugosi's Dead'. I played this until the tape finally broke. Sitting in a darkly lit room; stereo so loud, it annoyed the neighbors across the street. I know where some of my hearing problems originated. And at that age I wouldn't have it any other way.


"Continuing the back story of my Gothy past, here's one of the funnier details about my wife and I, when we first moved in together. On laundry day, we typically had 3 black loads, and half a light load. I don't think I owned a non-black shirt until my 30s. And here's the next song we were addicted to for months; Type O Negative's "Black No. 1 (Little Miss Scare-All)"
"There are so many great songs from that time period, the list could go on! But lets move on to the more recent, more atmospheric side of darkness. I want to share 3 (and not even close to all of the) discoveries I've made on SoundCloud that could all be strong contenders for scariest ambient song (or album) of the year, soundtracks suitable for your worst nightmares.

"This first is by Mood Exhibit's darker incarnation, Blink Twice. The song is called "Summoning". Suffice it to say, sometimes it's healthy to revisit and express your past, and Robert Salchak is great at embracing that dark inner child (check out any of the Blink Twice songs found on SoundCloud, and you'll know exactly what I mean.)"

"The second SoundCloud group to make my list is Humanfobia (comprised of S'bila Orbe on sound programming and Mist Spectra on vocals; and partnering with musician James Onsen for this project). They generously make these haunting soundscapes year round, so we have plenty of new material to get us through the next Halloween season, if you're that specific. Otherwise, just enjoy it year round. This song is entitled 'Aura Obscura'. "

And here's where the EP can be found, if the track whets your appetite.

"My last offering is from Darren Coyle, the genius behind Optapus (and his even darker, dark side Grim Heka). The Grim Heka music scares me silly (and the images he finds for his cover art are wonderfully creepy and disturbing). If you're running low on nightmare-inducing soundscapes, his latest album is there to help you out."

"Here is but a taste of this talented musician's frightening world."