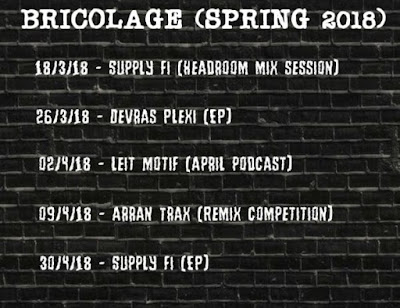 We’ve got a busy 6 weeks or so coming up at Bricolage with lots of fantastic sounds coming your way in the form of new releases, mixes and a remix competition.

We start off the busy schedule with our latest Headroom session this coming Sunday (18th) from the latest addition to our roster, Supply Fi. The US based producer has been a staple of the online underground scene for years now and has slowly handcrafted his own distinct style when it comes to production and mixing. His first foray into the Headroom world promises to be a spectacularly warped and beautiful episode. He follows up that incoming mix with an EP release on Bricolage at the end of April that will be sure to give you an insight into a truly intriguing musical mind.

Find some of his previous work on his Soundcloud and be sure to check out the Rumourtone mixcloud account for a slew of mixes curated by the man himself.

A fortnight from tonight we’ll be releasing an EP from an artist that we’ve had our heart set on for a long, long time. Devras Plexi is a one of those rare undefinable artists that pulls together all sorts of influences and concocts them in his own manner to create a musical potion that is uniquely standalone in what can be, too often, the clogged and sometimes banal world of electronic music.
Ever since his Bricolage debut track “Libre” last summer we’ve been eager to have a full release to bring you and this month we have our wish.

Check out his “Sentient Beats” album from earlier this year while you wait.

Our April podcast will see ambient specialist Leit Motif return for mixing duties. Inbetween two EP releases on Bricolage (‘Supine’ and ‘Till We Have Faces’ respectively) he provided us with a stunning dreamlike and translucent Headroom session back in the summer of 2016. His newest podcast is guaranteed to be another intricate horizontal excursion that you won’t want to miss.