0141 (An Open Project For Glasgow Producers) 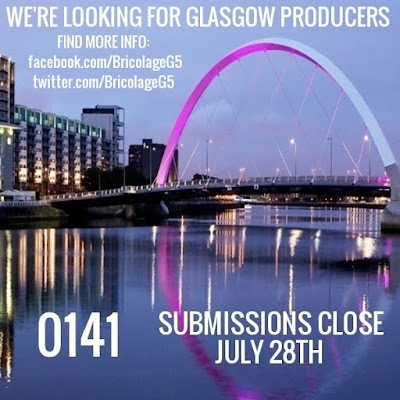 Bricolage celebrates our fourth anniversary in August and to celebrate we'll be releasing another special compilation. Over the last few years we've used the anniversary occasion to bring together members of the roster on some fantastic releases through our "Dyadic" and "Retcon" albums. These releases spanned a selection of our artists both old and new. The music on those releases came from far and wide. Including Hungary, Germany, Austria, America, Canada, amongst others, and of course, some from right here in Scotland.

This year we're coming full circle and bringing it all back to where it began for the label in Glasgow. With the upcoming "0141" compilation we're looking to showcase the emerging talent of the city's electronic scene. "0141" will feature new music from label head, Fragile X, and a few more Glasgow artists on Bricolage. We'll be looking to fill the rest of the spaces in with the sounds of the Glasgow underground and offer up an opportunity to feature on the new anniversary compilation which will therefore open up the possibility of future releases and collaborations with the label.

Submission info and details below:

Must be Glasgow based.

All electronic music welcome. Genre is non specific. Although we would highly recommend checking out some of our previous releases if you're not familiar with our core output.

"0141" is set to feature around 20 tracks. This number isn't a definite and may be expanded should we receive a high number of submissions.

Submissions are open from March 11th onwards and the closing date for submissions is July 28th.

Send your tracks as either private uploads to Bricolage on Soundcloud or email us at bricolageglasgow@gmail.com

All tracks will be considered, however, recently produced and new or previously unreleased music will be given preference. All submissions will be listened to in full and the successful "0141" candidates will be chosen by Fragile X, Justin Case and Dark Fidelity Hi Fi.

We're excited to see what comes from this so please share around and get involved.

The compilation will be released as a pay-what-you-want release with any profits going to the Golden Jubilee Hospital in Glasgow.

Please don't hesitate to get in touch if you have any queries.