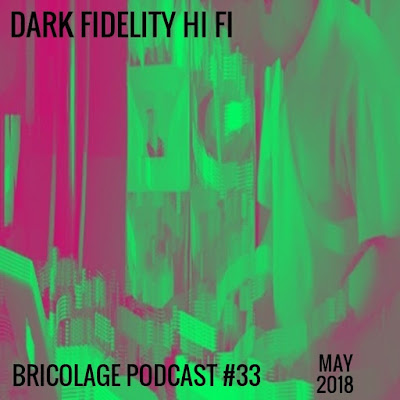 Our May podcast gives you the chance to immerse yourself in the captivating and hypnotic sounds of Dark Fidelity Hi Fi as we bring you an exclusive recording of his live set from this years Record Store Day festivities at Reel Around The Fountain Records in Manchester.

The full line up for the event involved DJ sets from Bricolage associate "Kinoko" and Bricolage label head "Fragile X" before the headline slot was filled by the machines and keyboards of DFHF.

Richard Jones, the main man behind DFHF, is clearly in his element when he performs in a live setting. It clearly gives him freedom and total control over every single noise that breaks through the system. This short but sweet half hour set sees him roam through his astonishing catalogue of sounds. It's littered with a range of shifting drum work, delicate keys, pad washes, mesmerising glitch patterns, soft and pulsing bass arrangements, attentive breakdowns and perfectly placed samples that are all sewn together with a craftmanship that is a joy to behold as he lets his 'no wave' style flourish. The set features new material from his latest album 'Gentle Static Flow' that was released on the 20th of April. Find a link for that release and the other relevant social media links below.

Stream the mix below or at our Mixcloud,

Watch a short clip of the live set below.