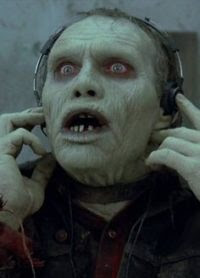 As Hallows' Eve draws ever closer we return with our "Ghost Stories" section on the blog where we ask some of the label roster, associates or alumni to give us a selection of their favourite eerie electronics and terrifying tracks. This year we've got Lying Cat, Steve Hadfield and Danni Rowan on hand to give us a fright....

Sunn 0))) are incredible - if you can see them live then definitely do so. I don’t really find their music scary, its such an overwhelming sonic tidal wave that, despite its darkness, its actually more meditative. It’s Julian Copes poem on My Wall that really infuses it with a frightening energy for me. Its an earlier Sunn 0))) release and to that end the quality isn’t as good as some of their later records - but this just further adds to the mystique and strange quality of Copes delivery. It really invokes films like The Devils or The Wicker Man for me. Its got that same ancient, earthy, natural, evil themes of a lot of Folk horror. It’s great.

I once put a shout out online for my friends to send me the music that scared them the most. One of my friends sent me this and I think its probably the most scuzzy, rotten piece of music I’ve ever heard. It’s so visceral and nightmarish. Despite dealing with a very real set of people and events it has an almost Lynchian level of dream like grot to it. I love the way Genesis-P-Orridge really draws out odd words and maintains an indifferent, almost bored monotone, even when the subject matter escalates into murder.

I imagine if you found this on a cassette in a ditch somewhere you’d be dead within seven days of listening to it.

I feel like you’re in the minority if you’re not afraid of clowns. Like Spiders. What this track does so well is sonically capture the paradox at the centre of clowns. Something that’s meant to be lighthearted and child like is actually totally sinister and threatening. The circus organ sound that comes in after about a minute is so wonderfully unhinged. Like its manically grinning through gritted teeth. The track then develops into a dark fairy tale, cementing its roots in horror rather than joy.

4. The Caretaker - All You Are Going To Want To Do Is Get Back There

This is my favourite record to put on at Halloween. Its like putting on Christmas music when you’re putting up the tree. Its gentle and obviously rooted within the concert hall music of the 20s and 30s but there’s a decaying, dream like atmosphere to the way the sounds have been treated that’s really ghostly. There are obvious connections to The Shinning for me as well.

I think the albums and The Caretakers whole approach to these projects is about memory loss, alzheimers and death - which in a quite different way is very frightening but its the hauntological nature of the audio that really makes this stand out for me. One day I hope it just comes through my speakers without me having put the record on the deck.

I had the perfect introduction to this piece. One particularly sleepless night I accidentally tuned into a late night (early morning) radio 3 show which was playing a host of strange and experimental oddities. Without any introduction the first air raid siren began bleeding through my headphones and I lay, half awake and yet totally transfixed for 13 minutes. Conceptually its an amazing piece of music but sonically I find it totally hypnotic. It’s perhaps not scary in the same way that some music can be, but instead there is a growing hysteria and tension that is never allowed to alleviate and its that tension that made me add it to this list.

You can find the debut EP on Bricolage from the mysterious feline here. The cat may be about to lose his second life on the label in 2020. Keep your eyes peeled for more news coming soon....

I could have picked several tracks from Mezzanine but the brooding opener seems most apt. There is a real stalking quality to the opening section with the insistent bass, echoing clicks and sparse instrumentation. The vocals add tension before the driving guitar crescendos. As an album, Mezzanine is fetishistic horror - there's a sleazy quality to the basslines, amplified by the languid-yet-snarling swells of guitars when they crop up.

Skinny Puppy are visceral - sometimes shock horror, other times Lovecraftian weirdness - but always visceral. 'Last Rights' marks the end of the initial Skinny Puppy run and leans into Lovecraftian gothic nightmares from the cover art through to the reverb-heavy production, guttural vocals, and mangled samples. Riverz End is the centrepiece, with ghostly choirs floating over clattering industrial beats and creepy textures. It threatens to be beautiful, but it's Skinny Puppy so it's never short of unsettling.

'By The Throat' seems like the obvious choice for a Ben Frost Halloween pick but 1) that featured in last year's Bricolage blog and 2) 'Stomp' from 'Theory of Machines' is the pinnacle of building tension through minimalism. Every aspiring electronica producer should study this track for its use of space - the details are in the gaps and the sound design is masterful. The bass is the protagonist's pulse as they hide in the dark and the driving guitar is the predator. This is Massive Attacks 'Angel' updated for the 21st century.

I love the etymology of this track. The original song is Hungarian and known as the 'Hungarian Suicide Song' with appropriate urban legend surrounding it. Popularised in its English language form by the incredible Billie Holiday, Venetian Snares uses that as a base for one of his most unique compositions. The feeling is one of black and white horror, with the lo-fi lyrics set against the jaunty military march of the standard Snares 7/8 percussion. Haunted strings and woodwind flurries heighten the tension. This is horror of the mind.

I felt like this list needed at least one black metal track, and the Gothic majesty of Thuja Magus Imperium seemed apt. Opening with ominous chiming bells and vocals that feel like an incantation, it's almost as if WITTR are summoning down the storm of noise which ensues.

Steve has also placed these tracks into a Spotify playlist which you can find here. You can catch Steve performing live at our first ever live event this December. RSVP here.

DANNI ROWAN
1. Eartha Kitt - I Want To Be Evil

“Like something that seeks its level/ I want to go to the devil...”

No song slices through the oppressive atmosphere of 1950s America with such a malevolent glint in its eye as ‘I Want To Be Evil’ by Eartha Kit.

In the song, our anti-heroine seeks to break out of her gilded cage, exchanging her “unspoiled gender” for booze, betrayal and hustling pool.

It’s surely the perfect soundtrack for a spot of trick or treating this halloween.
2. Laurie Anderson - From The Air

Pilot announcements are meant to reassure, but not when Laurie Anderson is in control of the cockpit.

“We are about to attempt a crash landing… your pilot says put your hands on your head, heh, heh”... so runs Anderson’s darkly philosophical monologue as our plane plummets to oblivion accompanied by a frantically turbulent brass section riff.

“You know, I’ve got a funny feeling I've seen this all before. Why? ‘cause I’ve got eyes in the back of my head.”

Well now that we’ve cleared that up, I guess all that’s left to do is put on this track, squeeze the eyes on the back of your head tight shut, and hope for a smooth crash landing.
3. Mica Levi - Lipstick To Void

I've not seen Under The Skin, the cosmic stalker horror set in my home town of Glasgow, but Mica Levi’s soundtrack is a horror film all of its own.

In ‘Lipstick To Void’ Scratchy strings slime, slither or scuttle their way across a dark and sparse sonic space occupied by clanking, gritty percussion and resonant mid range drones.

If this track doesn’t make the hairs on the back of your neck stand up you’re probably already dead.
4. Muddy Magnolia - American Woman (David Lynch remix)

David Lynch’s warped vision of the American Dream has its most pure musical form in his remix of Muddy Magnolia's cover of ‘American Woman’.

Twin Peaks: The Return introduces Special Agent Cooper’s sinister doppleganger against a backing that sounds like a slow motion explosion in a munitions factory, as a demonic voice instructs us to “bring the bacon and I'll put it in the pan”.

It sounds like breakfast at the Double R Diner is going to be an eventful affair.

“Every move I make is just a part of my plan/ And I do it just because you said I can't...” these lines could be the cryptic Mulholland Drive director’s mission statement, and I for one salute it.

Husband and wife duo The Handsome Family are my go-to resource for darkly comic gothic Americana, of which ‘Bottomless Hole’ is a standout example.

Compelled to investigate a mysterious abyss opened up behind his barn, a stubbornly brave farmer, aided by his wife, descends into the gaping pit in pursuit of either its end, or his… whichever comes first.

It’s black comedy at its most surreal and magical, and its final couplet always sends a shiver down my spine.