Bricolage : Release Round Up For 2018 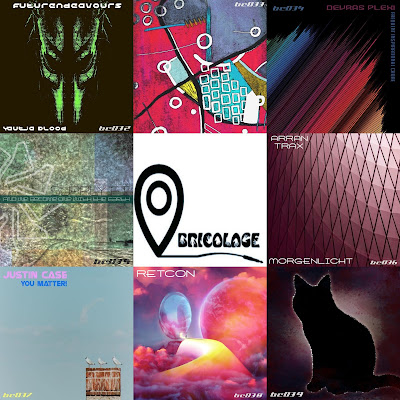 We'd like to think that 2018 was another consistent year on the release front here at Bricolage. 7 EP's and a huge anniversary compilation. We put out some truly fantastic music from a few label stalwarts whilst also welcoming exciting contributions from some new names.

A sample heavy, broken beat, sci fi themed soundcape. Both complex and hypnotic. These kind of epics are fast becoming a regular occurence from the local duo, futurendeavours. They don't release a lot but when they do, we know we're getting something big.

Angular electronics and finely sculpted, idiosyncratic, tones and beats from the Manchester based MHD.

A true audio kaleidoscope from one of the most unique producers on our roster, Devras Plexi. Prismatic, glitchy and extremely accessible IDM and ambient flavours galore. In September we re-released a bulked up version of the EP featuring extra tracks that included a stunning remix from Lo-Jacker.

APRIL
Supply Fi "...And We Become One With The Earth"

Shimmering, organic, ambient electronica from Supply Fi as he allows his natural songwriting ability to shine through on a truly expressive and balanced release.

Four slabs of hybrid electro/acid from an exceptionally creative mind. Hamburg based production whizz, Arran Trax, calls on raw analogue power and warm acid as he puts his own spin on the classic old school Detroit vibe. Fuzzy and extremely danceable sounds.

As far as debut releases go, label newcomer, Justin Case dropped what can only be described as a brain melting opening statement of intent. "You Matter!" was unconventional from the get go. Crunchy, abstract. elastic and positively vibrant. The perfect way to introduce yourself to the musical world.

Our most expansive and adventurous project to date was "Retcon". A gargantuan compilation that offered up creations from 20 distinct producers from far and wide as well as closer to home. The sounds on show cater to all manners of the electronic spectrum. As always, we'd like to think there's something for everyone inside the maze of "Retcon".

We rounded off the year with a release from the mysterious "Lying Cat". This anonymous UK based producer casts up a fragmented and hazy spell full of absorbing and reflective ingredients. Experimental in nature with a beautiful and nostalgic narrative that runs throughout.

A big heartfelt thank you goes out to all the artists who helped shape our year. Your time, talents and commitment are appreciated more than we could ever express.