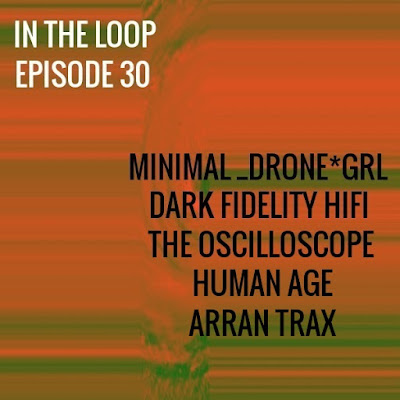 It's been a while since our last episode of ITL, so we're making up for lost time with some new episodes before the end of the year.

The first of which casts an eye and ear on recent sounds from Minimal_Drone*GRL, Dark Fidelity HiFi. The Oscilloscope, Human Age and Arran Trax.

"Hinterland" is an emotionally charged epic slice of drone/ambient from the Canadian producer. Her signature soothing tunes are on full display as this track drifts along perfectly.

Stunning glitch landscapes are second nature to Rick Jones. The man behind DFHF has mastered his craft over the years and is consistently creating his own unique sonic worlds. "Summer Ghosts" comes with some beautiful vocals from long time collaborator, Hannah Moore. A song about summers gone by....

We're a bit late to the party with this one...

"Handmade Ghosts" is a short fifteen minute mix of original material made with Halloween in mind. Dark and eerie acid lines, washes of analogue synth and that familiar rhythm work from the acid aficionado.

Ethereal vocals, calming sounds and gentle pads give way to a warm rhythm section full of crisp beats and a deep bass sound on this Human Age remix of RTIK "It's Not You. Chilled late night or early morning vibes depending on your mood.

"The Tunnel" straddles the line between light and dark perfectly. A hybrid piece of breakbeat/electronica from the prolific Scottish producer. Tough beats juxtaposed with with airy and warped melodics.