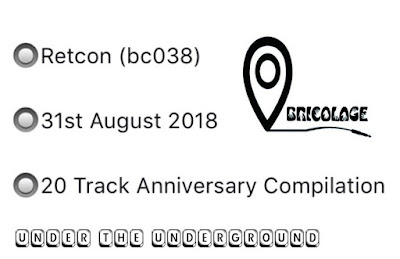 On Monday we revealed the first 5 current artists and on Tuesday we introduced the first 5 newcomers to the label. Tonight, we unveil the next 5 roster members to be featured on the release.

Sound engineer and producer extraordinaire, Rick Jones, is a vital cog behind the scenes at Bricolage in terms of promotion, distributing and mastering. But it's his expressions of sound through his Dark Fidelity HiFi project that garner the most recognition. His consistent creations of expansive and intriguing soundscapes know no bounds and he has written a brand new track exclusively for the "Retcon" release. Listen to "Hanasaku" below.

'All Buttons In' is another who has provided us with an exclusive track for the new album. Famed for his dark and deep mechanical creations, the Scottish producer has welded together a unique electronic piece in the form of "The Life and Death of a Neuron". We will be revealing that track soon.

Until then, check out his fantastic track from our "Vol 5" compilation last summer.....

"Minerva" is in the habit of making music with a distinctive edge. She's never been one to be afraid of venturing into abstract territories and her new track "Buzzkill" does exactly that. It twists and turns more than anything the Greece based Hungarian producer has ever concocted before. You'll be able to hear that track next week as we start the final build up to the new compilation album. For now though, let "Oligarch" (taken from "Vol 4" in winter 2016) works it's way into your ears...

The ever prolific Belial Pelegrim returns to the fold with an exclusive track for Bricolage in the form of the fantastically titled "Jellied Minotaur On A Bed Of Lettuce". The music is just as interesting as the title and we're excited to unveil the track soon. For now, check out the electronic mayhem of "Exoskeleton" from our previous "Vol 5" compilation.....

We welcome back the hypnotic sounds of "No Arrival" on the anniversary compilation. His new track "Terra Ratio" is another dark and trippy slice of his own unique brand of quietly intense broken beat material. We'll be sharing that with you very soon.

His most recent release on Bricolage was the four track EP "The Chance To Fail". A whirlpool of sonic experimentation and slow burning techno tendencies.